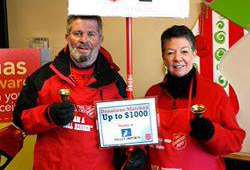 When most people think of the Salvation Army's Red Kettles, they think of Christmastime. Probably the last place anybody would expect to see one is in autumn, at a wedding of all places.

Incredibly, more than 150 wedding guests saw exactly that when Sally and Philip of Oxbow, N.D., got married in 1995 at their former home in New Jersey. In lieu of wedding gifts, the couple asked guests to donate to a Salvation Army Red Kettle situated at their reception.

"The kettle raised $7,000," Sally said proudly. "We've always been enamored with the work of The Salvation Army."

Sally and Philip even had a Salvation Army officer perform their wedding ceremony. The couple first met The Salvation Army several years earlier, when Philip worked on a business project with Commissioner James Osborne, former National Commander of The Salvation Army USA, and famed author Peter Drucker, revered as the Father of Modern Management.

Today, Sally and Philip live just south of Fargo, where they are recently retired from careers in local real estate. After all these years, Philip and Sally continue to be enthusiastic supporters of The Salvation Army. For nearly a decade, they have rung the bell every Christmas season at a local Hornbacher's grocery store in Fargo.

"The Salvation Army is remarkable," Sally said. "They are a huge part of this community."

The couple plans to support The Salvation Army far into the future. Their ongoing contributions will provide food, shelter and care for local people families most in need, for years to come.